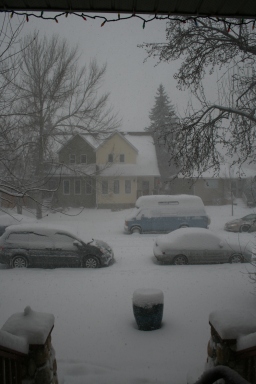 Stop focusing on the fact that my Christmas lights are still up and look at all that stupid snow.

That is some major bullshit. To some of you southerners this might appear like the end of times, but up here in Canadaland we just call this “March”. It’s Sunday so people will still go to church if they’re really dedicated, but less people will go shopping and we shall collectively roll our eyes and generally endure.

So anyway, that’s happening today. I may have over-imbibed a bit with the neighbors last night and my kids have the sniffles so I was really looking forward to a movie day. Maybe some baking. If things got wild, I’d make popcorn. You know, really earth shattering type stuff. But nothing that would require me to put my winter jacket on because I am totally done with that fucking thing. I am really serious about that.

You can imagine how delighted I was to wake up to the following conversation:

Engineer: Mommy, get the gray thing out of my mouth.

Mommy: (launching self out of bed) WHAT? What grey thing? What did you eat?

Engineer: The grey thing. From playgroup.

Mommy: (stabbing at eyes to make eyes work before remembering to put on my glasses) WHERE DID YOU GET IT?

Mommy: (In shrill, shrieking voice) Where is the grey thing?

Engineer: In my tummy.

And so in a flurry of coats and hats and boots and car seats, we found ourselves at the Children’s Hospital before breakfast. Not to cast aspersions on our local Children’s Hospital, because they are wonderful people who have given us excellent care over the years, but they were NOT AS PANICKED AS I WANTED THEM TO BE. In fact, they barely registered any alarm at all. They directed us to the waiting room where we sat next to the poster full of “Actual Items Swallowed by Children”. The actual items were glued to the poster and included things like buttons, pennies, small toys, a safety pin, magnets a KNITTING NEEDLE. Not one of those little crochet hooks, either; this needle could have been a bonafide weapon.  I am not shitting you. This informative poster did nothing to make me feel better.

There was virtually no waiting time because not many children were committed to self harm on a Sunday morning, so it was us and a few pukers. The Engineer informed the doctor that a grey thing was in his tummy and he wanted a picture of it, so off we went to x-ray. By the time we got to the x-ray, I was kind of didn’t know what to wish for. I kind of suspected that this could all be a lie, and here I was calling his bluff by shooting him with radiation. I had only a couple of seconds to ponder the risks of either proposition though, and decided on the balance it was better to find out what he ate.

The Engineer was a superstar about it and laid as still as he has ever laid for five seconds at a time. And we learned just a few minutes later that the kid was completely full of crap. Literally and figuratively. But no dangerously sharp, life threatening metal objects that were going to poison him and shred his insides, as I had naturally assumed.

Then we braved the blowing snow and crappy roads home. I am sure that the worst part for the Engineer was the twenty minute lecture, borne out of complete gratitude that he was totally fine and this was just a misadventure. Now we can get started on doing absolutely nothing today.

Yesterday we went to retrieve a bunch of stuff from the house and check out where things were at. As we were leaving I noticed a squirrel viciously guarding something from a swarm of magpies who were waiting for their first opportunity to get at whatever the squirrel had. The squirrel even gave me a stare as I approached; long enough that I thought twice about going to see what it was. I didn’t need a rabid squirrel bite on top over everything else.

It was, of course, Willis’s peach.

So to all the local wildlife, you’re welcome. Take the peach as an offering of good will, and I hope you don’t use this opportunity to take up residence in my abandoned house.

People who hang around here