One of my favourite things about keeping bees is that they demand community. You could probably do the majority of beekeeping alone, but it is so much more fun fretting over the bees with a dedicated bee co-parent as I had in Sarah. I also credit her husband Dave who was game enough to put up the Lucy and Ethel of beekeeping. You two are the bees knees. There, I said it!

Sarah and Dave purchased a new house and rented out their old place. The bees were a bit of a hard sell with the new tenants, given that the house was rented out in the “aggressive period” in September where bees are capping off their honey and guarding their resources from wasps. (It’s pretty impressive to watch a gang of tiny honeybees take down a wasp, by the by. The OCD among us will be happy to note that organization trumps all physical threats.) But the tenants agreed to allow the bees until they were done collecting pollen, as the bees would have swarmed back to their old location. Then we would have had Swarm: The Second Coming, claimed ignorance, and just moved on to a new hobby.

As pollen season wrapped up, we had to support the bees in their winter preparations. The bees were busy killing off all the useless male drones and shoving them out the door so they didn’t steal resources all winter (good system, am I right, ladies?). Our job was to make sure the colony was healthy and insulate it up for winter. This also meant that we’d get HONEY! LIQUID GOLD FOR REALZ HONEY! 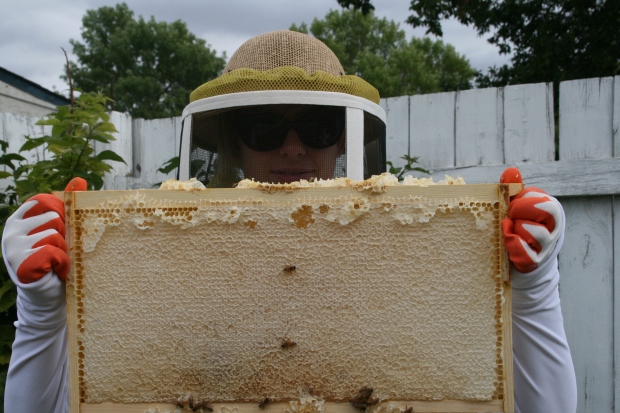 We later smashed this beautiful capped off honey apart and ate the fruits of their labour. Gotta pay the rent, bees.

Frankly, we were not really excited to steal honey from pissy bees after the Swarm: Everyone Gets Stung incident. But steal we did, and no one was injured. Sarah’s kitchen was very, very sticky though. We should have done it at my house where another layer of sticky would just be background noise against the layer of peanut butter finely smeared over everything. (Note, do not bring your kid with peanut allergies over here).

Straining out all the wax and bee parts. No one likes it when I say that.

As I found out, beekeeping involves an inexplicable amount of duct tape (we might be doing it wrong). This is when you should employ the bees’ community spirit and have someone help you so you don’t have wads of duct tape stuck to your clothing when you go to your fancy hair dresser, which is what happened when I slaved over custom insulation panels for the bee hive one day. I will never operate duct tape alone again. 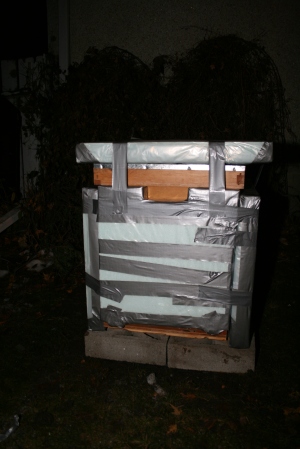 So much duct tape. But even more was stuck to my jacket at the hair dresser, causing my hair dresser to make A Face.

We were blessed with an early winter, and now the bees are only coming out to take a little tiny bee dump and then going back inside for another week. I AM SO JEALOUS. 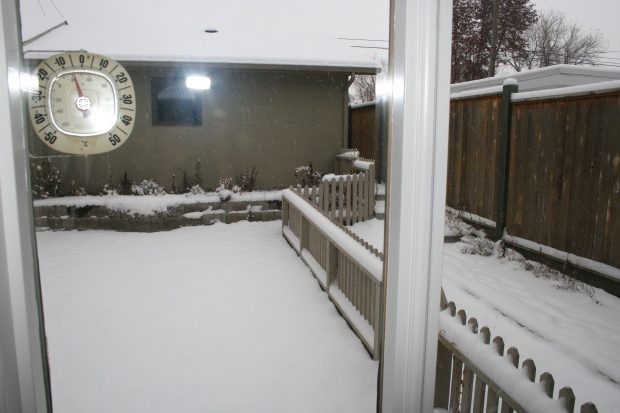 That is only half the fucking snow we have right now.

With the hunkered down for winter, we decided to move them to Sarah’s new house. Moving a hive that weighs something comparable to a small adult a block and a half was not going to be accomplished by us two broads, so we started cashing in on people’s general interest in beekeeping. It did not escape my notice that more people volunteered to move bees on a cold Monday night for no reward than attend my birthday party. I think that really speaks to the charismatic nature of bees.

We chose our bee moving crew well, and that sucker was safely packed up into the back of Dave’s Subaru without dumping thousands of bees to their frozen death as we had feared. The bees safely made the 1.5 block journey to their new home where they should be content for the rest of winter.

One of the standard features of an Impreza is that it perfectly fits a 2-level Langstroth bee hive in the hatch.

Then we raised a glass of mead to our efforts, reflected on the community nature of bees, contemplated next season, watched the swarm video about a dozen times and then decided on our next project: A reality show where we all wear GoPros all the time because they make everything look so goddamned awesome.

(Madame Weebles, stop your reading right here because this post is all about bees, honey, and disgusting holes.)

I am going through a phase. I think it might be a lifelong one, but it’s one where I am very interested in urban agriculture and slow food. I would love to garden but we have very little space in our yard and I am very lazy. I would love to have chickens but they’re illegal here and I can’t even handle our silly dog most of the time much less frequent visits from the bylaw officer. Anyway, at some point I envision myself selling little jars of delicious things to people at a market.

So when I was meandering around the community organization booths at our local folk festival a couple of years ago and was reassured by a cute young man with dreadlocks that beekeeping was “very easy” because “bees have been doing this for millions of years”, I became enamored of the idea very quickly. Then I became obsessed. My husband did not approve of me bringing tens of thousands of deadly killers into our yard under the premise that they might sting our young sons and dogs, but I think it’s really because he is afraid. Anyway, somewhere along the way my friend Sarah mentioned that she was also interested in beekeeping I jumped on it and we decided to set up ten thousand deadly killers in her yard instead.

Sarah took the introductory beekeeping course and we sent nervous e-mails off to buy bees. Apparently beekeeping had become quite a craze here and our fearless cooperative had a hard time keeping up. We found ourselves picking up random materials at weird times, assembling things that didn’t really make sense, and hoping against all odds that the bees would like their new home. 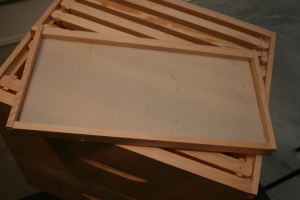 These are the frames that the bees make honeycomb. The most important thing about this photo is that I got to use a nail gun.

And so on Mother’s Day I found myself standing in a field with about fifty more trepidatious souls watching a lady confidently shaking bees off of frames and gently flicking them off her arm, and thinking “what the fuck am I doing here? This is the stupidest thing I have ever done.” I was handed a box full of bees for the back of my van (extra duct tape please!), and sent on my merry way over to Sarah’s house to put the bees in their new home.

I’ll admit, I was expecting to be stung a thousand times over that day and to hate bees forever, but it turned out that there was nothing to be afraid of at all. We put the bees in their new box, shut the lid and watched them for a few hours without incident. 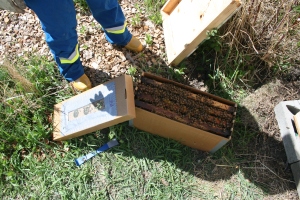 Look at all those mofos! 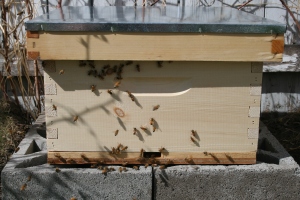 The first two months were a roaring success. The bees stayed in their home and built up comb and we occasionally took the lid off, took some pictures, patted ourselves on the back at our incredible beekeeping skills and toasted the hive. We were clearly naturals at this. It was shaping up to be a glorious summer.

What goes better together than kids and bees?

Ominously, days before I left on vacation a beekeeper was on CBC radio talking about how novice beekeepers often make mistakes and only find out after there is a swarm. What? Mistakes? No way. I left on vacation during a heatwave; it was 35 celcius or so (95 F = em-effing hot when you don’t have air conditioning). Sarah updated me that the bees had started bearding, as in, they were climbing all over the opening of the hive, not that she had taken to wearing a beard of bees (I had to clarify). Sarah assured me she was freaking out enough for the both of us, but concluded that it was just because they were hot and needed to air their little bee selves out. I resumed drinking beer in relief and promptly forgot about it.

The next update was not quite as calm. When I arrived in PEI, I had texts, Facebook messages, phone messages that the bees had fled! They were swarming! It’s the motherfucking beepocalypse in the yard!

Indeed, the bees had fled

Predictably, the bee cooperative was busy dealing with dozens of other swarming incidents, so Sarah and her husband bravely set out to earn their beekeeping badges. They essentially needed to get the queen back in the box and the rest of the bees would follow. So they put a tarp down, shook the branch and hoped like hell the queen fell into the tarp and dumped the box back on top of the writhing mass of bees. Amazingly, it worked and no one really got hurt.

Then they got ambitious. They had to kill some of the queen eggs off so that there would be no new queen = bee war = factions = second swarm. Or something. I didn’t actually take the course. This was at about 11 pm, and the internet warned that bees are not real fussy about nighttime visitors. Let’s just say that this was confirmed. About three times over. In the face.

But Sarah was not deterred. She knew the bees needed more ventilation in the box if they were going to survive the heat wave. So she bravely dove in to MacGyver a new entrance for them. It…. didn’t end well. A bee got in her hat and she understandably panicked after witnessing her husband get stung IN THE FACE Y’ALL. The bees, already pretty pissed at being hot, shaken out of a tree, and thrown in a box multiple times, at night, chased Sarah down and tried to murder her. She got stung TEN TIMES. And half an hour later, SHE WENT OUT AND REASSEMBLED THE HIVE. She is my goddamn hero, people, because I would have burned that thing to the ground with an improvised hairspray torch while laughing maniacally and drinking mead made from their honey. 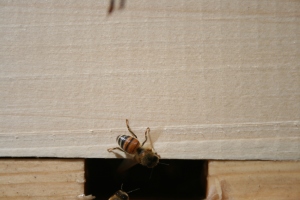 You are very lucky I was on vacation, my little friend

So thanks to the quick thinking and extraordinary measures of Sarah and her husband Dave, we’re still beekeepers but perhaps a bit more cautious now. And this has a lovely ending, because Sarah pointed out that it was a marriage building exercise. In her words:

“(A)s Dave and I were cooperating to funnel a pile of bees into the middle of a tarp, I thought “this is probably the only guy in the world for me.” Who can you handle thousands of angry bees with and still like in the morning? Very few people I reckon.”

Next up: winterizing the bees. I’ll keep you posted on whether there’s any survivors.

People who hang around here